You can find here the stores you are looking for. 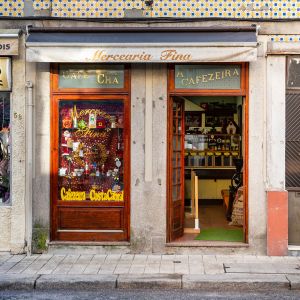 Cafezeira is an establishment of many years, initially focused on coffee and spices, having introduced new products tailored to the demands and needs of its customers. Coffee is still the protagonist, from several origins, lots of pure coffee, blends of coffee with barley, just to mention a few, ground to the customer’s machine, various teas, seeds, dried fruits – honey-dropped figs, from the Douro, Turkish, dried pears, walnuts in shell and shelled, hazelnuts, grapes, plum corinthians with and without stone, dates, apricot, pine nuts – dried fruits and spices. They also sell avulsed and with environmental concern, which means that the customers can bring their containers. 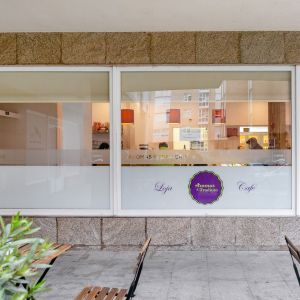 Aromas & Tradition opened in 2020, merging the best of two worlds, the regional and the gourmet. In this sense, the establishment has a shop area for the sale of regional products, such as alheiras (a typical Portuguese sausage whose main ingredients may be poultry meat, bread, olive oil, lard, garlic and paprika), smoked products, wines, cheeses, honey, chocolates, among others, handicraft items, Paupério biscuits, Mirandela bread, ‘Leite de burra’ soaps, and a cafeteria area, where its customers can taste all its products. The phrase that defines Aromas & Tradição is the following: “It is born of a passion. A passion for what is traditional and homemade. A space that we want to share with everyone. To be, to socialise and to taste our products. Feel the aroma and let yourself be carried away by tradition”. 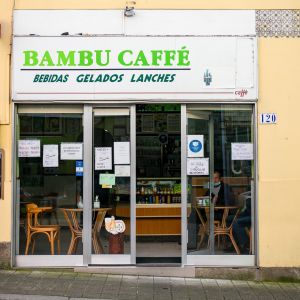 If you are looking for a quiet, welcoming place with a family atmosphere, Bamboo Caffé can be part of your choices. To take a break, to relax, to work a little to the computer, to study, to live together, to take a cup of coffee or a drink to regain the forces, or a snack to snuggle – a beef sandwich, some ‘moelas’ (small onion and tomato stew to which chicken or duck gizzards are added), a roasted ‘chouriça’, just to mention some – the Bamboo Caffé represents that type of space. Bamboo Caffé also offers meals, in a fast meals combo with typically Portuguese products, such as ‘alheiras’ (typical Portuguese sausage whose main ingredients may be poultry meat, bread, olive oil, lard, garlic and paprika), sausages, hotdogs and special toasts, having also salads and house combinations. Besides the interior space, there is a small esplanade at the door. 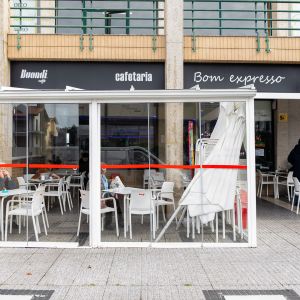 Café Bom Expresso is said to be a unique space for you. The simplicity of the establishment gives you a cosy and familiar atmosphere, which is accompanied by the sympathy and attention of the staff. If you are looking for a place to relax, while having a coffee, reading your newspaper or getting into your book, if you are looking for an atmosphere that invites you to take a break, whether for breakfast, a snack or a meal, Café Bom Expresso can be that choice. With interior space and a generous terrace, you can enjoy your snacks, peanuts, lupins, among others, or try its version of the famous Francesinha (a sandwich from the city of Porto, consisting of sausage, fresh sausage, ham, cold meats and beef steak, covered with cheese later melted; it is garnished with a tomato, beer and piri-piri sauce and can be served with French fries as a side dish), while accompanying with a cold beer or any other refreshing drink. 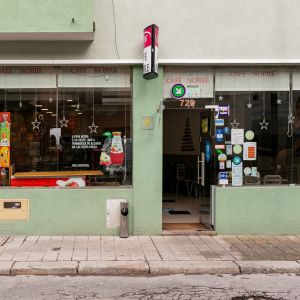 What makes Café Nobre noble is the simplicity and genuineness with which it receives its customers. The atmosphere is familiar, welcoming and lively, which is provided by the personalised and friendly service. If you are looking for a coffee, a break to have a snack or a candy, or to hang out with friends, Café Nobre can be one of those contemplated. However, it can also be the space to have a meal. First of all, Café Nobre invites you to try what they themselves consider to be the best Francesinha (a sandwich from the city of Porto, consisting of sausage, fresh sausage, ham, cold meats and beef steak, covered with cheese later melted; it is garnished with a tomato, beer and piri-piri sauce and can be served with French fries as a side dish) in the city of Porto. There are also hotdogs, hamburgers, beef sandwiches or beef on the plate with chips, omelettes, mixed toasts, baguettes, salads and much more. 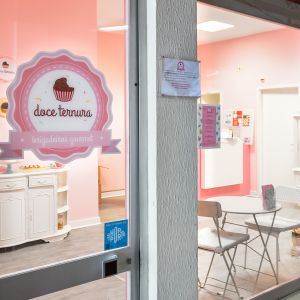 Initially existing only through an online platform, due to its success, Doce Ternura opened doors in the city of Porto by its founder, a young entrepreneur of Brazilian nationality.
Its high quality gourmet brigadeiros, produced by hand with the best products on the market, bring this typical Brazilian sweet to Porto.
If at Doce Ternura the brigadeiros are the main attraction, in their traditional form or with different toppings, homemade cakes, cupcakes and chocolates are also worth mentioning, promising to delight those who visit this space. 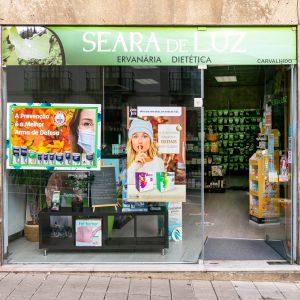 Ervanária Seara de Luz was founded in 2005, being a company that privileges the close relationship with the client, providing a personalised and qualified service. It seeks to meet your needs, guiding you towards a better quality of life. It is dedicated to the marketing of natural and dietetic products (food and supplements), natural and biological cosmetics, as well as a diversity of therapies. They offer personalised advice in the field of phytotherapy, naturopathy, homeopathy, flower therapy, aromatherapy, natural cosmetics, nutrition, among others. They also perform massages, facial and body aesthetics, among others. 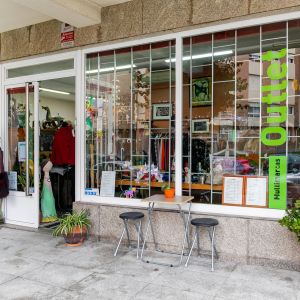 One of the greatest traditions of Portugal is based on the quality of its production, whether in the food sector or in the textile, clothing and footwear sector. In a time of fast fashion consumption, the Portuguese market is unable to sell its own production, so it turns to export. Filomena Pinho Bastos Outlet is in the market to subvert these rules, opening this space so that the quality of Portuguese products is within reach of national consumers. It sells clothes produced in Barcelos, which is rare to find in Portugal, as the bulk is for export and you can find in this establishment articles of clothing for women, men and children, beachwear, among others. 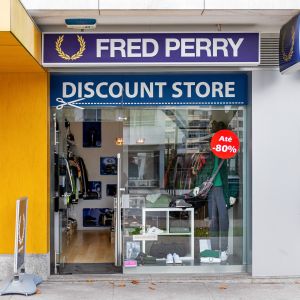 In this establishment with Fred Perry branded clothing you can find antique pearls, i.e. pieces from old collections at special prices. Fred Perry owes his name to his founder, an English tennis player who won Wimbledon three times. In addition to his sporting gifts, he became known for his sense of style, which led him to design the first polo shirt of the brand. The iconic double-edged polo shirt with a discontinuous dot caused the brand to migrate from sportswear to casual wear. After having inspired a generation of tennis players, the polo shirt with the laurel wreath inspired a generation of rebels linked to cinema, music and other sports. That is the spirit you can find in Fred Perry Discount Store. 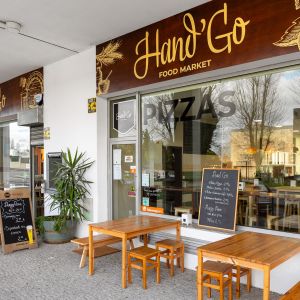 The Hand Go opened in 2015 as a grab and go space, to pick up and take away. In a city that is becoming more and more crowded and where people increasingly run from one place to another, this establishment fits into this daily rhythm. It is to enter, ask and leave. The worst that can happen is to have to stop and savour it. That and having to choose. There is a running counter in the shop, where the pizzas of the day are displayed, healthy and served by slice, but there are also healthier options, such as vegetarian crepes, sweets or savouries, fresh salads, with Cesar, Pesto and Vegan versions, pancakes, fruit salads and natural juices to accompany. Hand Go does not want you to lose sight of it, but it also does not want you to forget to eat. 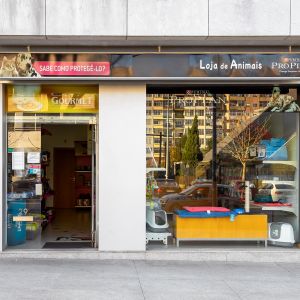 Lord Kent is a pet shop where you can find everything for your pet, with a specialised service and offer products with brands recognised in the market, such as Pro Plan. It offers a wide range of products for dogs, cats, birds, rodents and even reptiles. Here you will find recognised, recommended and excellent pet food for your four-legged best friend, as well as the type of toys and accessories. Everything for it to have a healthy, happy and safe life transmitted by the owners. You can count on the support and expert advice of the staff, helping to make the right decisions in the care, feeding and care of pets. 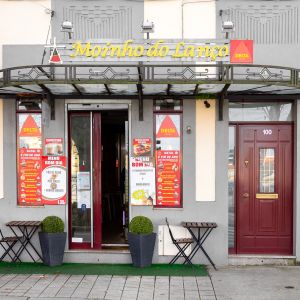 Moinho do Lanço is a cafeteria and restaurant, with a cosy and familiar atmosphere, a decoration that mixes rustic and contemporary, with a covered terrace, all the elements that the establishment offers so that, as mentioned by the others, “you feel at home”. The offer is varied and homely. There are hot chocolate, homemade cakes, toast, natural juices, rustic bread sandwiches, dogs, hamburgers, omelettes, typically Portuguese snacks, various versions of the famous Francesinha (a sandwich from the city of Porto, consisting of sausage, fresh sausage, ham, cold meats and beef steak, covered with cheese later melted; it is garnished with a tomato, beer and piri-piri sauce and can be served with French fries as a side dish), in puff pastry or ‘bolo do caco’ (made with wheat flour, yeast, water and salt; with these ingredients a dough is made; wafers are formed about 3 cm thick and at least a palm diameter; traditional baking is done on a basalt stone, properly heated for the purpose, until a hot temperature is reached. It is commonly used to make sandwiches based on the ‘bolo do caco’ and various fillings such as beefsteak, ham, swordfish, octopus, among others), pizzas, and daily dishes, made based on traditional Portuguese cuisine, served on menus with competitive prices. It has take-away service.

Riscas & Pintas is a second hand clothes, shoes and props shop, where those who buy can also sell. This is an increasingly current concept and also in vogue in Portugal. With an ecological component, one can find, in this establishment, a great opportunity to battle consumerism and waste, but also with a financial component, offering articles at very competitive prices, in a context that is not very favourable to the economy. Not only of sale does Riscas & Pintas live. If you have something that, although in good condition, you no longer use, you can also put on sale in this establishment. The offer, as you might expect, is varied, for all genders, ages and fashion trends. 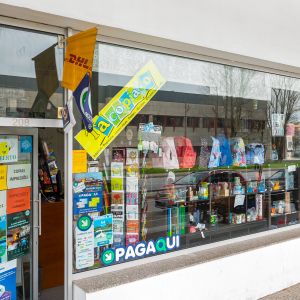 For those who attended university know that he spent as much time inside the college as inside the copy center, waiting for the articles recommended by the teachers, the books and notes of the best students. Tacopiado was born within a college and followed this day-to-day. About 12 years ago, this store opened when the Higher School of Health Technology of Porto was also inaugurated in Gaia. After moving to the place where he is today, he still has photocopies, prints, bookbinding and everything that fits in a copy center as his main service, but also sells stationery and handicrafts.